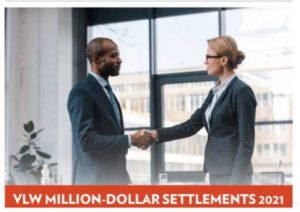 The results are in folks, and I am pleased to announce that my firm’s previously-announced qui tam settlement in United States ex rel. Bishop v. Level 3 Communications, et al. was the second-largest settlement in Virginia for 2021 according to Virginia Lawyers Weekly.  The total settlement on behalf of the United States — as reported to Virginia Lawyers Weekly, more on that below — was $12,772,843.00.  This puts us well behind number one, which was for $18.7 million — and congratulations, by the way, to Robert Redmond and his powerhouse team at McGuireWoods for this achievement…

Each and every year, Virginia Lawyers Weekly compiles the largest civil settlements in Virginia and publishes the list in a special issue.  It is always nice to find your case on the list — as I have in 2012, 2017, 2018 and now 2021 — and in qui tam practice this is not only for the obvious financial reasons.  If you practice in the area of qui tam litigation, it is nice to find a qui tam case on the list — whether it is mine or someone else’s — because it establishes the world of qui tam practice just a bit more in the legal world.

As regular readers know, qui tam cases are cases brought under a statute like the federal False Claims Act — or a comparable state statute like the Virginia Fraud Against Taxpayers Act — that allow any person with knowledge of fraud or false claims on a government entity by another “person” to bring a case 0n their own behalf and on behalf of the government.

Because a litigant is bringing a case not only in her own name but also in the name of the government, these cases require a number of unusual procedural hurdles.  Among those unusual hurdles, cases are filed under seal and served only on the government (or governments, as the case may be).  The government then does its own investigation and determines whether it wishes to intervene (and take control of the case) or decline to intervene and let the relator proceed on his or her own.

On top of these amounts, the relator is also entitled to receive her “reasonable expenses which the court finds to have been necessarily incurred, plus reasonable attorneys’ fees and costs.”

As the Bishop case illustrates better than most, there is no such thing in this world as a free lunch.  There is no free lunch because although recoveries in these cases can be quite large, they are neither easy nor quick.  Relators and their lawyers earn every dollar they make, and they might have to wait quite a long time…

The case was originally filed in November of 2013.  As might be predicted, a complex case resulted in a complex investigation.  The defendant in the civil qui tam case, Level 3 Communications LLC, is a “tier-one internet provider,” which means they construct, own and maintain the physical infrastructure of the internet.  During his employment with Level 3, Stephen Bishop learned that his superiors in Level 3’s senior management had paid (and received) bribes and kickbacks and had conspired with several non-Level 3 employees to submit false claims to the United States. When Bishop’s efforts to stop these frauds internally within Level 3 failed, he resigned his employment and hired counsel for this qui tam lawsuit.

The federal Anti-Kickback Act (41 U.S.C. § 8702) makes it illegal for any contractor or subcontractor to pay or receive a kickback or bribe in connection with the award or performance of any federal contract.  This case was actionable under the federal False Claims Act because paying or receiving a kickback or bribe renders subsequent invoices to the government “false,” as the United States does not pay claims tainted by kickbacks or bribes.

Of those four criminal indictments, defendant Tim Donelson committed suicide just before the original trial in October of 2018.  Another Level 3 executive, Ron Capallia, pled guilty more or less right away and cooperated with the government.  Capallia and Wilson elected to go to trial.  The first attempt resulted in a criminal mistrial at the end of October 2018.

The retrial began on June 4, 2021, and the jury returned guilty verdicts on June 24, 2021, after less than a full day of deliberations.  Defendants Lumho and Wilson received stiff prison sentences earlier this year.  Lumho got 7.5 years and Wilson got 15 years…

I would like to thank all of the government lawyers who worked so diligently and for so long on this case, especially AUSAs Gerard Mene and Krista Anderson.  In particular, Krista did a great job when, in 2021, she became the third civil AUSA to be assigned to this case…Gerard and Krista not only delivered a great result, but they did it with style and class and top-notch professionalism…