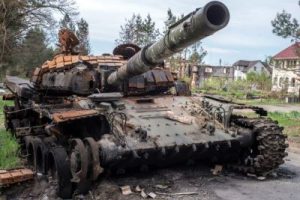 Russian tank destroyed by Ukrainians when it ran out of gas

As this blog has discussed before, people tend to get distracted by the (sometimes) enormous sums of money the United States recovers using the federal False Claims Act.  While this is understandable — and certainly the money is important and the government itself likes to do press releases  about the total amount of money it recovers each year — it is important to stop every so often and look at the real importance of the federal FCA, which in my opinion has little or nothing to do with money.

In the opinion of this writer, the main purpose of the federal False Claims Act is limiting corruption in the United States, and preventing corruption from becoming part of American culture.  The on-going war in Ukraine shows clearly why this is an important objective.  The Russian invasion of Ukraine has faltered for many reasons, but chief among them is the simple fact that the Russian Army is — like Russian society — corrupt at every level.

Backdrop of the War in Ukraine

As most readers will know, on February 24, 2022 Russia invaded Ukraine launching the first true war on the Eurasian landmass since World War II ended in 1945.  As any student of history and culture knows, a strong, credible, argument can be made that the Russians are some of, if not the, most brutal people on earth.

And of course armies are the product of their particular society, which means the much-feared Russian Army is made up of the most brutal people on earth.  On top of this, the Russians in general boast cutting-edge technological know-how and ability.

And the Russian Federal is more or less controlled by a single man, Vladimir Putin, in what some have called “a willing dictatorship.”  Unlike the Soviets before him, Putin never had to put up a wall to keep Russians from leaving and, until recent events, there was little true evidence of serious discontent in Russian society.

Putin is also a product of the cold-war era KGB with all that that entails.  One does not rise to the top of an organization like the KGB without being ruthless, brutal, and politically smart.  He certainly killed or had people killed and he may or may not have completed secret work for the KGB in New Zealand under a false name.

The President of Ukraine, by way of contrast, made his name playing Paddington the Bear and winning Dancing with the Stars.  You can see how everyone thought this would go at the start.  President Zelensky and his government were expected to fold effortlessly — like an expensive, well-maintained lawn chair — and head for the west, where they all could have accepted university positions and spent the rest of their lives writing books and earning speaking fees.

But that is not what happened.  Zelensky stood and fought, and the rest of Ukranian society took their cue from him.  This kind of thing is unusual in places like Ukraine, by the way.  It is well known that in certain cultures people in positions of power who start a war use their power to keep themselves (and their loved ones) safe and well out of harm’s way after the shooting starts.  But Zelensky stayed put, and so did his wife and children…they vowed to all die together.

Ukranians, and the rest of world, were inspired by this.  As a result, not only did the Russian army fail to take the capital and topple Zelensky’s government, but after less than one month of fighting the Russian advance stalled and was unable to do anything other than sit back and lob rockets and artillery rounds at civilians.

And now, as this post is written, the Ukranians are on the offensive and have regained thousands of square miles of territory and multiple cities and villages previously held by the Russians.  In fact, the Russians have been pushed out of some of the very territories that they purported to annex this month.  It is tough to see how 97% of the population supposedly endorsed the Russian annexation…

The Russians are certainly backpedaling, but Putin has  called up several hundred thousand reserves;  furthermore, anyone who knows their history know that it is a major error to count the Russians Army — or the Russian people — out.

Major failures almost always have multiple causes, and this war is no different.  The Russian invasion has failed for lots of reasons, but corruption is a key factor.  That Russian tank you see featured in this post?  It was destroyed by Ukranians when it ran out of gas and was abandoned by its crew.

Corruption in the Russian Army

It is well-known that corruption is endemic in Russian society.  As I mentioned above, an Army is a product of its society, so it should come as little surprise that the Russian Army is largely corrupt.  But the word corruption is an emotionally-laden term that has many uses.  So what do I mean?

Google has given me two very nice, very complementary, definitions of the word “corruption:

1. dishonest or fraudulent conduct by those in power, typically involving bribery.
2. the process by which something, typically a word or expression, is changed from its original use or meaning to one that is regarded as erroneous or debased.
I would combine these two definitions into something like “the process by which those with authority are diverted or distracted from their original duties by efforts to benefit themselves.”

As I have written before, we tend to think only of powerful, wealthy people as corrupt.  And it is true that as the old Slavic saying goes, “A fish always start rotting at the head.”  But in society generally (and especially in a unique, insular culture like the military) when the people at the top are corrupt, the people right below the people at the top also become corrupt, perhaps because corrupt people tend to hire only hire other corrupt people, or perhaps out of necessity to survive.  So then the people right below them become corrupt, and so on ad infinitum all the way to the lowly private right at the bottom.

In 1995 the Los Angeles Times reported that Russian infantrymen were selling rifles, hand grenades, and even rockets to the Chechen guerillas they were supposed to be fighting.  (In an addition sign of corruption the L.A. Times says that the infantrymen extracted promises from the rebels that they would only shoot officers.)

According to the L.A. Times article, when the Russians were unable to sell their equipment, they would simply throw it away.  This is most definitely a type of corruption as well…

So we should not be surprised, when we see videos of Russian soldiers given food that is years out of date.  When we read reports from 2011 that fraud and corruption had become an epidemic in the Russian military, we can be certain that it has only gotten worse over the last eleven years.

And its so easy for those in military positions to be corrupt.  A major part of military affairs is logistics — food, water, gasoline, weapons, radios, bullets, batteries, vehicles, boots, tires, socks, etc., etc.  And all of these things have a high street value or black market value.

Retired Army Lt. Gen. Ben Hodges put it this way in an interview with U.S. News:

“These are the kinds of things that are the result of either total incompetence or corruption: false reporting, people signing off on things that actually don’t meet standards, and of course the individual Russian soldier. It’s legendary the stealing that they do…”

A fish might start rotting at the head but the rot always grows.

To be fair, the existence of the federal FCA is not all that is required.  Certainly Putin or anyone else could pass a law styled after the FCA, but it would be dead in the water because Russia lacks a robust legal system — that is, fair and impartial courts and a group of dedicated professional lawyers (inside and outside the government) who prosecute these cases.

So with every single False Claims Act settlement I see, I sleep just a little bit easier at night, because I know a seed of corruption has failed to take root in our country.