By Zachary Kitts on June 30, 2017 in False Claims Act Practice in Virginia, How to be a successful qui tam whistleblower, Office of the Attorney General of Virginia, Virginia Fraud Against Taxpayers Act

The United States Department of Justice and the Virginia Office of the Attorney General announced a $4.2 million settlement in a qui tam case of mine earlier this month.  My firm (K&G Law Group) was one of three firms involved and so I would be remiss not to mention my esteemed co-counsel, Steve Baril and Mike Lesser. 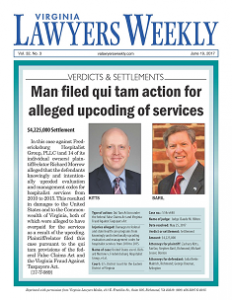 We jointly represented Rick Morrow, a former executive of Fredericksburg Hospitalist Group, P.C.  Mr. Morrow will receive 17% of the total settlement.  Mr. Morrow, who has spent his entire career in health care, was pleased with the outcome:  “Overbilling for health care services saps our federal and state tax dollars, and I am glad we have laws like the federal False Claims Act and the Virginia Fraud Against Taxpayers Act that level the playing field and allowed me to address these wrongs.”

The Complaint was filed on Mr. Morrow’s behalf in 2014 and his allegations — that defendants upcoded hospitalist services from 2010 to 2015 — were investigated by Assistant U.S. Attorney Robert McIntosh, and Assistant Attorney Generals Vincent J. Vaccarella and Adele M. Neiburg.

In a statement U.S. Attorney Dana J. Boente said “Rooting out fraudulent billing by healthcare providers is a priority; this office will continue to pursue such matters vigorously.

Hospitalists — defined as physicians who focus only on treating patients within a hospital — typically bill using CPT codes for patient evaluation and management services.   These include codes 99221-99223 (initial hospital care services) and  99231‑99233 (subsequent hospital care). Each of these groups of codes has three levels, for low, moderate, and high complexity. Thus, CPT 99221 is a low complexity initial encounter; CPT 99222 is one of moderate complexity, and CPT 99223 is an initial encounter of high complexity.

These codes also have an option to bill based on face-to-face time spent with the patient.  For example, codes 99221 covers up to 30 minutes, 99222 covers up to 50 minutes and 99223 covers up to 70 minutes.  If billing based on time, the physician is required to properly document the patient encounter to justify the billing amount and CPT code.  As regular readers know, in the world of FCA qui tam litigation, cases like this are commonly called “upcoding cases,” but the truth is that upcoding just means billing for services not provided.

For my part, I would like to thank all of the aforementioned government lawyers, Mr. Morrow (for being such a great client) and Mike and Steve for being some of the best lawyers I have ever worked with.