Zachary Kitts appointed to the faculty of the Harry L. Carrico professionalism course

Earlier this month I was appointed to the faculty of the Virginia State Bar’s Mandatory Professionalism Course.  Most states and jurisdictions require a similar course for newly admitted lawyers, but Virginia’s course was the first such program.  The course is named for Chief Justice Harry L. Carrico, who in addition to his 42 years on the Supreme Court of Virginia, was the driving force behind the creation and implementation of this course. 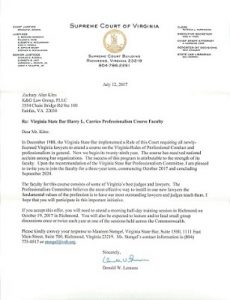 Attorneys and judges appointed to serve on the faculty are recognized for their commitment to upholding and elevating the highest standards of honor, integrity, and courtesy in the legal profession, and I am proud to be among them. At the definite risk of sounding like an old-timer, when I took the course — in 2001 — it was still led by Justice Carrico himself.  Justice Carrico retired in 2003 so I must have been one of the last classes to have this privilege.

But there is also more to it than that.  As I recall, the faculty of the course I attended back in October of 2001 really opened up and shared personal stories from their years in practice.  Although “professionalism” is central to being a lawyer it is hard to define in the same way that words like “ethics” are hard to define.  One of the things I came away with was the understanding that professionalism requires constant work — it is not a merit badge you obtain and then forget about.