I am pleased to announce that according to Virginia Lawyers Weekly the $18.1 million settlement last year in U.S. ex rel Chao v. Calnet, Inc., et al. was the second largest settlement of 2012. 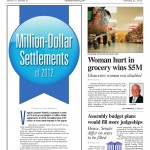 Of course, cases of this size and complexity don’t result from the work of just one person — my client did yeoman’s work preparing the case and explaining complicated accounting concepts to me and to the government several times over, and he earned every dollar he got.

And as regular readers know, there may have been other settlements that might have fallen into this category…but that is all I have to say about that.

I have said all along that there is no finer place to file a qui tam lawsuit than in the Eastern District of Virginia.   Hopefully, next year will see more qui tam cases in the top settlements of 2013!