Browsing: / Home / Virginia whistleblower retaliation bill has little or nothing to do with the Virginia Fraud Against Taxpayers Act
Print Email Shortlink

As some readers know, I have been in Richmond several times in recent weeks for sessions of the General Assembly related to H.B. 731, which  makes important amendments to the anti-retaliation provisions of the Virginia Fraud Against Taxpayers Act.  (FYI, unfortunately, H.B. 731 died in the Senate this week, on a straight party-line vote.)  In the process, however, I learned that there is at least one other whistleblower bill moving through the legislature as well.  This legislation, House Bill 439, is designed to protect government employees and others from retaliation for reporting fraud, waste and abuse. 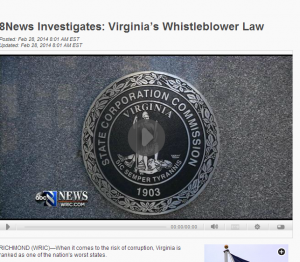 House Bill 439 is sponsored by Del. James LeMunyon.   The bill was the subject of a news piece this week by Investigative Reporter A.J. Lagoe.  As do many commentators — and more than a few lawyers — Lagoe and others talk about “whistleblowers” so I thought I would do a post today on the similarities and differences between this sort of whistleblower law and the Virginia Fraud Against Taxpayers Act…and I will address in a future post what the term “whistleblower” means anyway.

Investigative Reporter A.J. Lagoe and Waste in the Commonwealth’s Government

WRIC Investigative News Reporter A.J Lagoe has been investigating waste and abuse in our state government for some time, and yesterday he had a feature piece on the news.  The gist of Lagoe’s piece is that many Virginia government employees have witnessed waste and abuse of taxpayer dollars in the course of their employment.  I have no trouble believing that.  Lagoe interviews several Virginia government employees who confess to seeing lots and lots of waste and abuse, but not speaking out for fear of losing their jobs; as such the people are interviewed using the old 60 Minutes technique of obscuring their images and voices.   I have no problem believing that these folks are afraid of losing their jobs, and the truth is that they probably would be fired if they spoke out.

Still, while I applaud the work of Mr. Lagoe and Del. LeMunyon, I for one am not at all certain that there is much that can be done about the problem of fraud within the government ( which seems to be the focus of Del. LeMunyon’s bill) as opposed to fraud upon the government, which is the focus of the Virginia Fraud Against Taxpayers Act (and the federal False Claims Act).

The Virginia Fraud Against Taxpayers Act already provides a good remedy for state and local government employees who complained about fraud on the government or made efforts to stop one or more violations of the VFATA…and by tying the concept of “protected activity” (because a person must prove that they engaged in protected activity to trigger the protections of the VFATA anti-retaliation provisions) to an effort to stop a violation of the VFATA we had about as good a proof model as we are going to get.

At the end of the day, while I applaud the work of Mr. Lagoe and Jim LeMunyon, H.B. 439 has nothing to do with the Virginia Fraud Against Taxpayers Act, although it does, thank goodness, state as much in its text.

Stay tuned readers, for a follow-up post on the meaning and history of the term “whistleblower.”