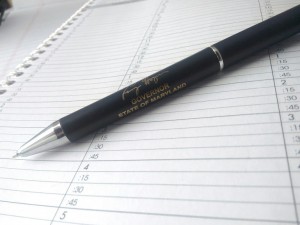 Yesterday Maryland Governor Larry Hogan signed the Maryland False Claims Act of 2015 into law.  The bill was designated Senate Bill 374 and was approved by the General Assembly earlier in the session.

I was honored to be invited to attend the bill signing, pictures of which will follow…for now, a picture of the pen used to sign will have to suffice.

Over the last six years I have written articles and testified before the Maryland legislature at least 10 times that I can recall; this year at last we had the support of the new Attorney General, Brian Frosh, and I think that was critical.

Seems strange to me, but every state has their own unique style and I guess this works for Maryland. Or perhaps I should say, it has worked so far for Maryland.  Ultimately, the Maryland False Claims Act will need to be amended to make it a true false claims act — as of now, we are still in the incrementalist process, and so the law leaves much to be desired.

In fact, it is not even a true false claims act, but it comes closer than ever before…So, dear readers, I doubt if I have made my last trip to Annapolis and I doubt you have seen the last post on the Maryland legislative process…