Regular readers are accustomed to hearing about state by state legislative battles over false claims act legislation, but today we have some news from the United States Congress itself.

And, I am pleased to report, we came away with a significant win.  Sen. Charles Grassley (R-IA) testified on behalf of the federal FCA, as did Judge John Clark. 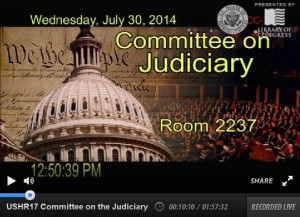 Link to a recording of yesterday’s testimony

Bear in mind, this was not a legislative hearing per se in that no new      amendments were or are proposed to the federal false claims act. Rather, this  hearing was to review the effectiveness of the law.

Among many other highlights, Senator Grassley (who of course is known for plain speaking and calling it like he sees it) said the Chamber of Commerce (who of course has fought the federal False Claims Act and state false claims acts at every opportunity) ” represents the biggest fraudsters in America” and had “an entirely fictional plan to fight fraud.”

The Chamber’s expert on corporate compliance programs (whose organization is, of course, funded by the Chamber itself as well as a number of pharmaceutical companies) said compliance programs cannot help if a company does not have, and is not committed to, a culture of integrity and ethical behavior.

David Ogden carried the water for the Chamber of Commerce…and when asked to name a compliance program that worked and was a model of success, he could offer up no examples of success…not a one.