By Zachary Kitts on September 19, 2014 in False Claims Act Practice in Virginia, Office of the Attorney General of Virginia, Potential Uses of the Virginia Fraud Against Taxpayers Act

The Fourteenth Annual Taxpayers Against Fraud Education Fund Conference was this week, and as usual, it was a great event.  I have been a regular at this conference since 2007, and every year seems to get better than the last.  However, this year was one of special significance for the Virginia Fraud Against Taxpayers Act, and I am proud to say that the Commonwealth was in the spotlight twice. 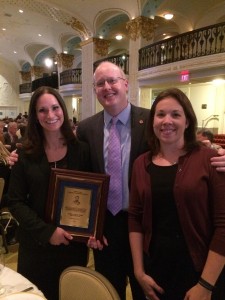 First, I was honored to present the 2014 “Honest Abe” award for good government to the Virginia Medicaid Fraud Control Unit.  And I meant what I said there — we are used to hearing government at all levels point to a lack of resources to justify inactivity, and when government entities refer to “resources” what they mean is money.

There is, however, a far more important resource in government affairs than money, and it is leadership.  The Virginia Medicaid Fraud Control Unit has it, and the proof is in the results that the consistently obtain.

The second major event came on the final day of the Conference.  As regular readers of this blog know — and as referenced above by the Virginia MFCU receiving the Honest Abe award — Virginia has a top-notch enforcement unit for health care cases under the Virginia Fraud Against Taxpayers Act.

So, I was especially pleased to see, on the final day of the conference, the press release by Virginia Attorney General Mark Herring announcing his intervention in a non-healthcare qui tam case against various banks for defrauding Virginia Retirement Services….hmmm, sounds vaguely familiar — does it not?

The case is captioned Virginia ex rel Integra Rec LLC v. Barclays Capital et al. and it was initiated by a relator on January 24, 2014 in the Circuit Court for the City of Richmond.

Despite the similarities to my FX Analytics case, I do not represent the relator in this one, and I actually don’t know who does, but I am happy to see that more lawyers are taking an interest in these types of cases, and that can only be good for the Commonwealth of Virginia and for the taxpayer.

I knew on the first day of the conference that something was afoot — General Herring was originally supposed to attend the TAF Conference, but had to cancel at the last minute, which is a sure sign of something….