Today we will take a look at HUBzone certifications and federal false claims act violations — that is to say, fraud and false claims against the Historically Underutilized Business Zones Empowerment Contracting Program, more commonly known as the HUBzone program.

The HUBzone program – created by the Small Business Reauthorization Act of 1997 and administered by the United States Small Business Administration – aims to stimulate economic growth in certain areas of the country.  The program is no doubt worthwhile, and has done much good in the last 17 years. The basic requirements and goals of the HUBzone program are set-forth in 13 C.F.R. §126.100.

As regular readers know, to find the false claims in government procurement, you just need to follow the money. Wherever and whenever the government commits large amounts of money to a specific goal, fraudfeasors are sure to follow. By that measure, the HUBzone program is indeed a most tempting target because the federal government has set a goal of awarding 3% of all dollars for federal prime contracts to HUBZone-certified small business concerns.  In order to qualify for a piece of this lucrative HUBzone action, a business must be certified by the SBA as meeting all of the following criteria:

(1) the business must be a small business by SBA standards;

(2) it must be owned and controlled at least 51% by U.S. citizens, or a Community Development Corporation, an agricultural cooperative, or an Indian tribe;

(3) the principal office of the business must be located within a “Historically Underutilized Business Zone; and,

Parenthetically, a number of counties in Virginia qualify as HUBzone locations.  These locations are, as indicated in the map below, mostly in Southwest Virginia and Southside Virginia with a smattering in Northern Neck and even a bit up next to the West Virginia line, but I digress. 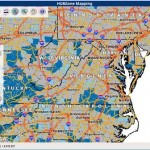 Once a business is certified as a HUBzone business, it must be re-certified every three years. In addition, a HUBzone business is required by law to report any “material change” to its HUBzone status. A “material  change” includes, but is not limited to: changes in the ownership, Changes in business structure, changes in principal office and failure to meet the 35% HUBZone residency requirement.
So what happens if a business plays fast and loose with these requirements?

You guessed it readers – if, at any time after becoming certified, a certified entity fails to maintain its eligibility for HUBZone certification, such entity and its principals are required to “immediately notify the SBA” of its lack of eligibility (See 13 C.F.R. §126.501). Stated another way, there is an affirmative obligation on the part of any certified HUBzone small business to notify the SBA if they suddenly, for whatever reason, become ineligible to participate in HUBzone contracts.

The penalties for failure to comply with such requirement explicitly include, among other things, liability under the federal False Claims Act. See 13 C.F.R. § 126.900(b).
And, in addition to the obvious false claims and fraud arising from the original certification process (or, after initial certification, a failure to immeditately notify the SBA of any changes) there are numerous other ways businesses can run afoul of the law. In order for such a violation to rise to the level of a false claims act violation, it would be necessary for the businesses actions to be taken “knowingly.”